Lusail Boulevard, as in the “Champs-Elysées”

Semeru volcano erupts on the island of Java

The drift of Casablanca: the Moroccan artist Fátima Mazmouz questions the memory of her country in “Resistance”

The pharmaceutical industry, a still embryonic sector in Africa

in Moscow, unenthusiastic reactions to the ceiling of the price of the barrel to 60 dollars

By dauphine dissard, Institute for Research for Development (IRD)

It is now well established: the industrial revolution had a strong impact on our societies, but also on our environment. the the increase in atmospheric CO2 concentration due to human activities is a clear example. Understanding this increase, its scale and its consequences is essential today: for this, all over the planet, laboratories look for new indicators, new data and scrutinize new sectors.

At the IRD we have been able to reconstruct this phenomenon for more than three centuries in the waters of the South Pacific. To do this, we analyzed a long core (about three meters) extracted from a massive coral colony southwest of Nouméa, in New Caledonia, which preserves the memory of the evolution of ocean temperature and pH throughout its lifetime. . . Our results clearly date the origin of current climate change and point to the role of human activities.

From the increase in atmospheric CO2 to ocean acidification

It has been calculated that approximately 41% of atmospheric CO2 is absorbed by the oceans, however, atmospheric CO2 concentrations due to anthropogenic activities have experienced a continuous and drastic increase since the beginning of the industrial era. The consequences are twofold: over the last century, this has caused an increase in surface water temperatures, as well as a decrease in ocean pH.

This acidification is directly related to CO2, since the latter, returning to the water from the atmosphere, becomes a weak acid, hence theobserved acidification.

Since the dawn of the industrial age, the Ocean surface pH has already dropped by about 0.1 units. And the phenomenon will continue, the latest IPCC report suggests a decrease of 0.3 pH units by the end of the centurywhich also has the effect of affecting the chemistry of oceanic carbonates as a whole.

Carbonate chemistry and temperature are critical environmental parameters that control a variety of chemical, physiological, and biogeochemical processes key to the development and survival of many marine organisms. Organisms that use calcification to develop skeleton, shells, tests, etc. The carbon cycle, itself a key parameter of Earth’s climate, is also affected.

The impacts of the ongoing changes are being intensively studied, but the lack of precise long-term observations with high geographic resolution makes it difficult to understand them and their feedback on Earth’s climate.

Certain elements, in this case their different “versions”, or isotopes, are used as geochemical tracers: we study the isotopes of boron (to follow the evolution of pH) and oxygen (witness to the increase in water temperature). Registered in the carbonate skeleton of corals, they provide us with a unique opportunity to continuously reconstruct changes in the environmental parameters (T°C and pH) of the seawater where corals have developed over several centuries. What then to assess the validity of the scenarios on future climate change.

If temperature reconstructions of coral cores have been made for several decades, boron isotope measurement with high precision and in small amounts of material has only been possible for about fifteen years, and still requires a very expensive and complex technique. to access.

It remained to find a coral large enough to be able to go back far enough in time. This was possible thanks to IRD divers, who work daily in the New Caledonia lagoon and were able to detect live heads at several meters high. Sampling is done using a drill, brought to the area by boat. The carrot brought to the lab is then cut in half before a slice covering its entire length is removed and X-rayed.

The extracted core reaches 3 m in length, which allows an analysis over more than three centuries. D. Dissard/IRD, author provided

These radiographs allow us to establish the core age model before proceeding to the microsampling of carbonate averaged per year of coral life. Carbonate that is then analyzed in various mass spectrometers to obtain data on the different target isotopes and that will allow us to reconstruct the pH and temperature of the water in which the coral lived.

As expected, the pH and temperature of seawater experience natural fluctuations from the beginning of the studied sequence; we were able to go back as far as 1689. They correspond to already widely documented climatic disturbances in the Pacific, such as the Pacific Decadal Oscillations (or PDO ) and El Niño. However, from the middle of the 19th century, a gradual increase in the acidity and temperature of the water was superimposed on the natural disturbances, until they were exceeded in intensity.

This change coincides very clearly with the beginning of the industrial revolution and the massive use of fossil fuels. Boron isotopes have allowed us to show that the average pH of seawater has dropped from 8.05 in 1890 to 7.9 in 2000, and probably around 7.85 today.

Data obtained from our core reflect a steady increase since the beginning of the industrial era in both acidification and warming of the water in this part of the Pacific, followed by an acceleration over the past 30 years.

To consolidate these observations, an additional isotope was analyzed: carbon. In fact, anthropogenic atmospheric carbon, resulting from combustion processes during the use of fossil fuels, has a lighter signature (the lighter isotope, carbon-12, evaporates more easily during combustion). This carbon, enriched in C12 and trapped in atmospheric CO2 molecules, returns to the ocean and is thus recorded by the coral.

Here, too, the results are indisputable and make it possible to perfectly correlate the increase in temperature and the acidification of the pH of surface waters, with an enrichment in CO2 that is undoubtedly possible as a result of human activities. This proves the action of Man on the earth’s climate. 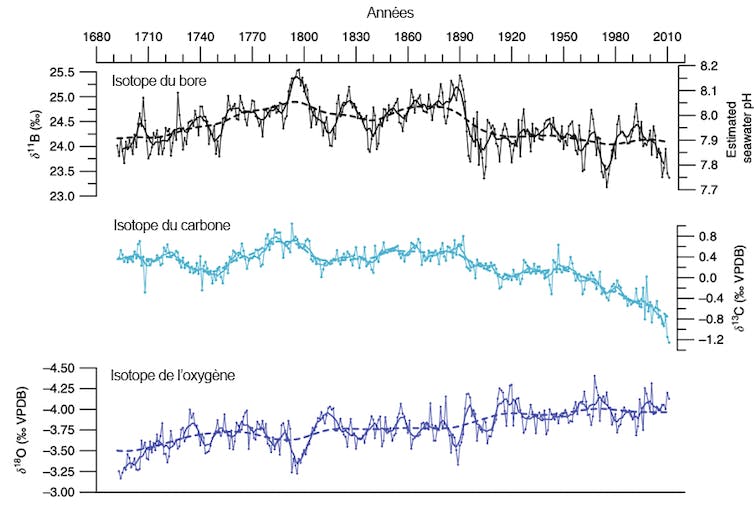 Evolution of the compositions of the three isotopes throughout the coral core and therefore over time. In black, the boron isotope that allows us to follow the evolution of pH (the pH scale is on the right). In turquoise blue, the carbon isotope provides information on the anthropogenic origin of this additional CO2 at the basis of the warming of the waters and the acidification of the oceans, as evidenced by the drop in pH. In navy blue, the oxygen isotope traces the rise in water temperature. D. Dissard/IRD, author provided

Our results, although obtained in New Caledonia, can be extrapolated to the whole world. And today, cores from all oceans are being analyzed or analyzed. Each time, it is clear that warming temperatures and acidification of the water is taking place due to an excess of carbon of anthropogenic origin.

Additional studies are underway. At IRD, we analyze cores from other regions of the Pacific, and sometimes very far away, such as Clipperton, an isolated atoll in the far eastern Pacific. Other international research laboratories, with which we sometimes work, are also investigating it. This allows multiplying the data and obtaining complementary results to accurately characterize the impact of global changes in the different oceanic areas of the planet.

This article is published as part of the Fête de la science (which takes place from October 7 to 17, 2022 in mainland France and from November 10 to 27, 2022 abroad and internationally), of which The Conversation France is a partner. This new edition has as its theme: “Climate change”. Find all the events in your region on the site fetedelascience.fr.

This article is republished from The conversation under Creative Commons license. Read theOriginal article.